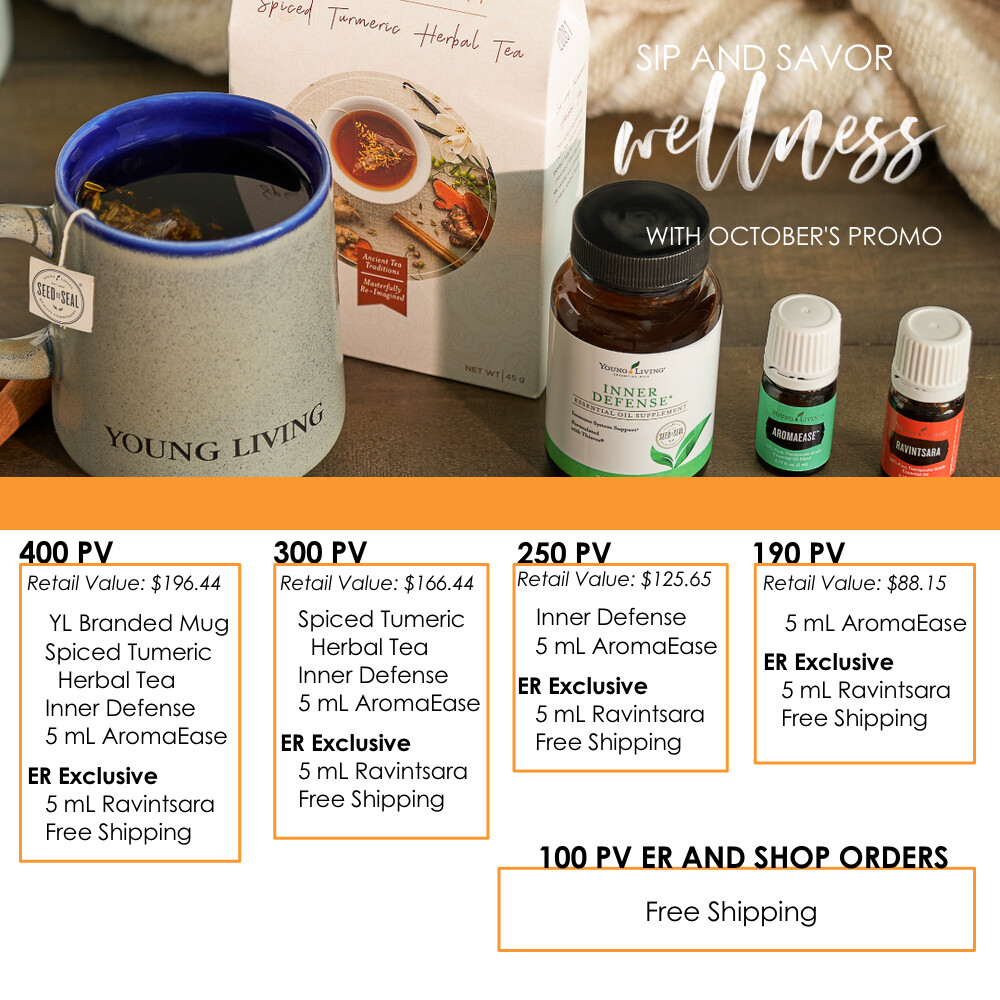 Fall into wellness with October’s PV promo picks! With the cool, crisp days inviting you to get outside and play, now’s the time to refresh your routines and harvest healthy habits.
Start by adding the fresh, earthly smell of Ravintsara to your yoga or meditation sessions, then boost well-being with a soft gel a day of Inner Defense. After an afternoon of apple picking and mastering corn mazes, cozy up to a cup of Spiced Tumeric Herbal Tea - and enjoy this rejuvenating blend in our exclusive Young Living mug, handmade by women artisans in Vietnam who have faced economic hardships. When life isn’t pumpkin spice and everything nice, diffuser AromaEase and make relaxation a priority.
5 ML AROMA EASE | FREE WITH 190 PV ORDER
AromaEase essential oil blend is perfect for creating a powerful and comforting space. The blend’s key essential oils—Peppermint, Spearmint, Ginger, Cardamom, and Fennel—make an aroma that is minty, fresh, and bold. Try diffusing it at home, around the office, or even in your car. AromaEase can also be used topically on your neck, shoulders, or abdomen for a refreshing sensation and soothing aroma.
HISTORICAL USES OF PEPPERMINT
Peppermint leaves have been used as a remedy for indigestion since the Ancient Egyptians, and the ancient Greeks and Romans valued it as a stomach soother as well. During the eighteenth century, the herb became popular in Western Europe as a remedy for nausea, vomiting, morning sickness, respiratory infections, and menstrual disorders.
Peppermint was first listed in the London Pharmacopoeia in 1721. In modern times it appears in the British Herbal pharmacopeia as a remedy for intestinal colic, gas, colds, morning sickness, and menstruation pain.
HISTORICAL USES OF SPEARMINT
Spearmint was once macerated and added to milk because it appeared to lengthen the shelf-life of milk and keep it from curdling. It was also recommended for use by people with delicate constitutions or young children with ‘feeble digestive powers’. One herbal published in the 17th century listed more than 40 ailments that spearmint was good for, including stings and bites, wound healing, and sores. It was also highly favored for helping with memory and reducing headaches.
//nerd alert//
Google Pharmacological Evaluation of Mentha spicata L. and Plantago major L., Medicinal Plants Used to Treat Anxiety and Insomnia in Colombian Caribbean Coast and check out the cool conclusion!
HISTORICAL USES OF GINGER
Ginger (Zingiber officinale), a common spice that was considered a luxury more than 5,000 years ago, has a very rich history. The Indians and ancient Chinese used the root of ginger as a tonic to treat common ailments. Although ginger originated in Southeast Asia, it was widely cultivated in other countries. By the 1st century, traders had taken ginger into the Mediterranean regions.
Since the ancient times, it was used as a folk medicine. “Jamaica ginger” was for instance frequently used for dyspepsia, gastroparesis, slow motility symptoms, constipation, and colic. A mixture of ginger and a sweetener made from palm tree juice was used din Burma as a prevention from flu. Ginger was used in Japan to help the circulation of blood. Tangawisi juice, prepared in Congo is considered a cure-all. It is made of ginger and sap from a mango tree. Ginger made into a paste is used India to relieve a headache by placing it to the temples. in some localities, ginger is used as a short-term relief of pregnancy-related nausea and vomiting.
HISTORICAL USES OF CARDAMOM
Ancient Egyptians used Cardamom for many medicinal purposes, as part of rituals and even for embalming. They chewed cardamom pods as a way to help keep their breath minty and to help clean their teeth. The Greeks and Romans used Cardamom for its pungent aroma. It was a main ingredient in perfumes and aromatic oils.
Medically, it was used mainly as a flavor and an aid to digestion. It was used more prosaically to treat colds, bronchitis, fevers, inflammatory conditions of the oropharynx, and liver complaints.
HISTORICAL USES OF FENNEL
Fennel history dates back to Pliny (AD 23-79), the Roman author of The Naturalis Historie. He believed that serpents ate and rubbed against fennel because it was able to improve their eyesight after shedding their skins. Following that observation, Pliny believed fennel was so powerful that he used the aromatic herb to treat 22 different ailments. Hippocrates suggested fennel could aid wet nurses to increase their milk supply.
A staple in the household of King Edward I of England, his wardrobe account books from 1281 listed a purchase of 8 1/2 pounds of fennel seed – a month’s supply! Why so much? Fennel seed was used as a condiment and an appetite suppressant. One Church mandated ‘Fastying dayes’, the faithful used fennel to get through the day. 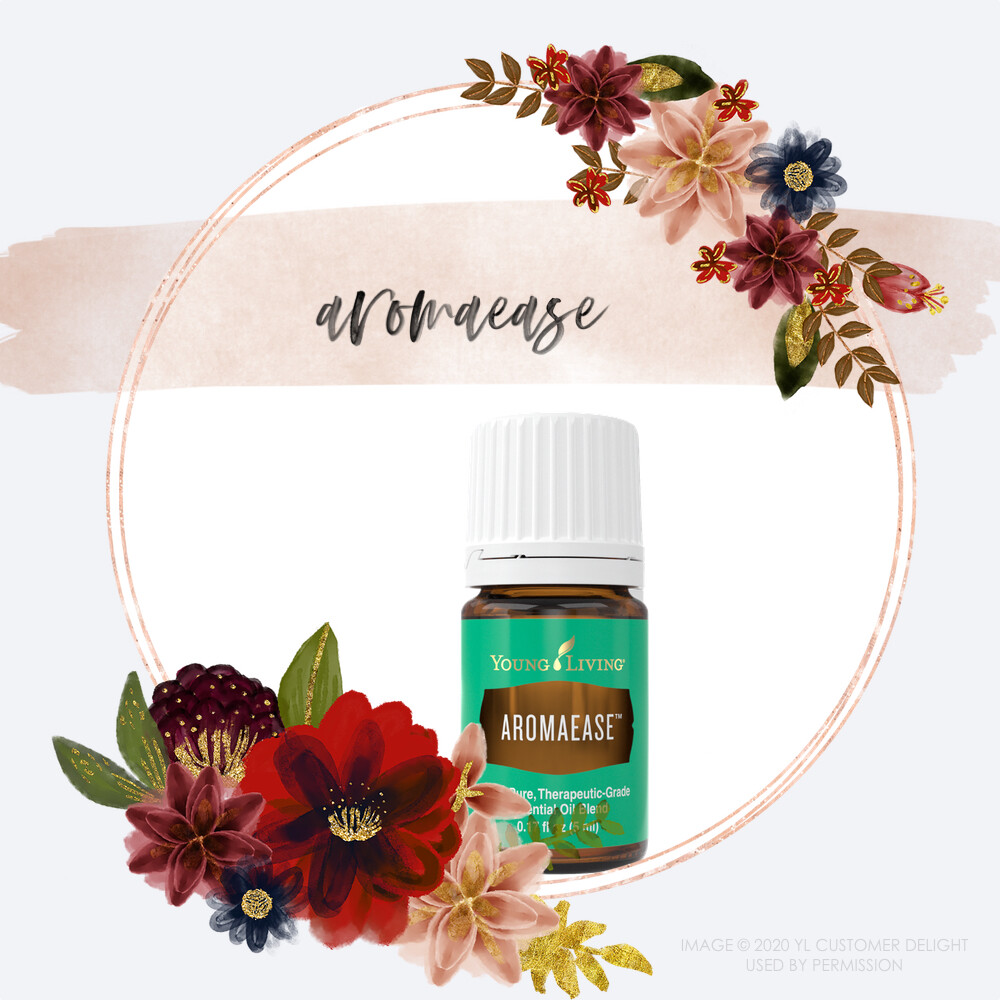 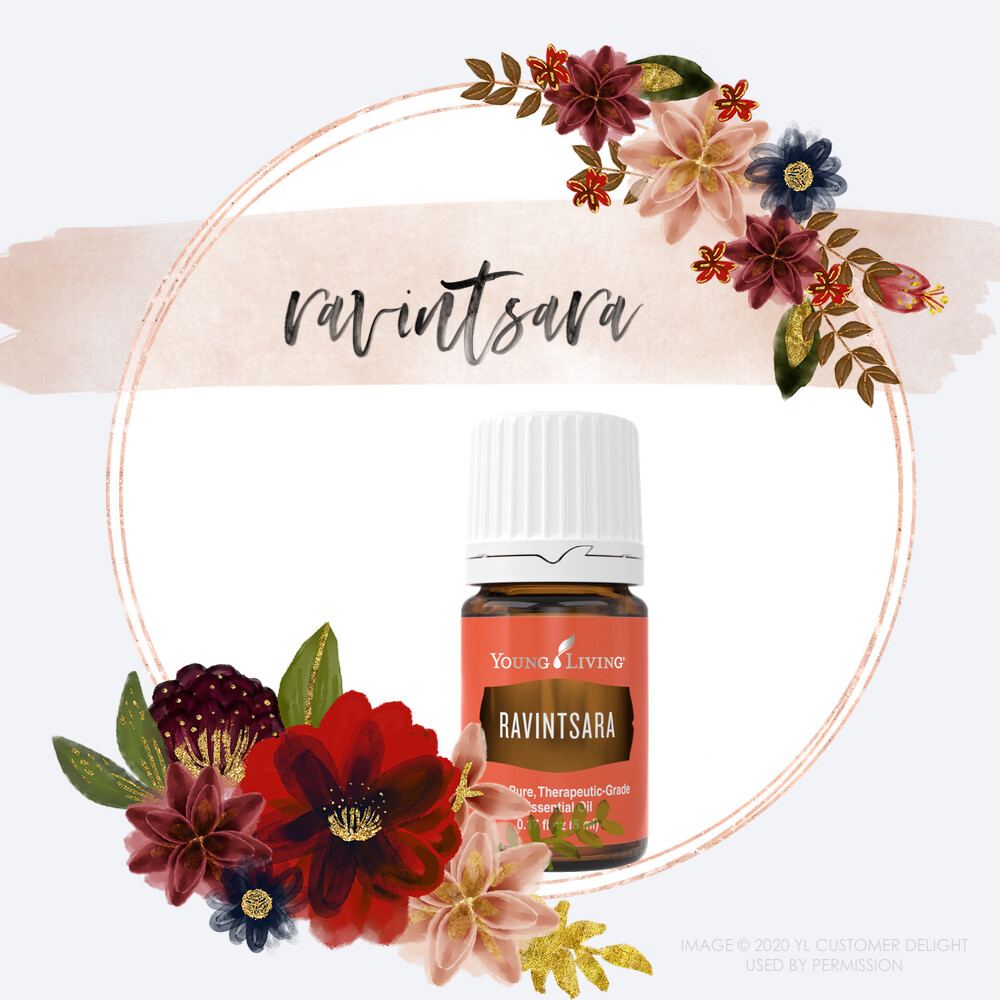 5 ML RAVINTSARA | FREE WITH 190 PV ESSENTIAL REWARDS ORDER
Ravintsara essential oil has a pleasant and clean scent, is commonly used in meditation, and contains skin-cleansing properties.
HISTORICAL USES OF CAMPHOR (RAVINTSARA)
Camphor is a waxy, white crystalline solid substance, obtained from the tree with a strong scent. Its terpenoid is originally obtained by distillation of bark from camphor tree. Camphor has been used for many centuries as an antiseptic, an aphrodisiac, a culinary spice, and a component of incense and for cold remedy and other medicinal purposes.
INNER DEFENSE | FREE WITH 250 PV ORDER
Inner Defense™ reinforces systemic defenses, creates unfriendly terrain for yeast and fungus, promotes healthy respiratory function, and contains potent essential oils such as Oregano, Thyme, and Thieves®, which are rich in thymol, carvacrol, and eugenol for immune support. The liquid softgels dissolve quickly for maximum results. The softgel capsules are formulated with fish gelatin to remove the need for carrageenan and beeswax.
HISTORICAL USES OF OREGANO
In the middle ages oregano was commonly used for medicinal purposes. They would chew the oregano leaves as a cure for many ailments such as rheumatism, toothache, indigestion, and coughing fits.
During this time, Oregano also made the journey to China. It was also used for medicinal purposes in this region. The Chinese people believed it helped with fever, vomiting and upset stomach.
During the Elizabethan era, oregano was used for just about anything. It was used to encourage good luck and good health. It was used in spells for happiness, tranquility, luck, health, protection and letting go of a loved one. It was also worn during sleeping to give one psychic dreams.
HISTORICAL USES OF THYME
Thyme’s reputation as a healer and protector goes back thousands of years. In the Roman era, it was widely held that eating thyme either before or during a meal would protect you from poison. For obvious reasons, this made the herb a particular favorite of the emperors. It was even said that a bath in warm water liberally dosed with thyme could stop the effects of poison after it was inadvertently consumed.
When the Black Death struck in the late 1340s, millions of people turned to thyme for relief and protection. Many of the day’s medicinal concoctions—from posies worn about the neck to poultices applied directly to plague-blistered skin—included the herb as a major ingredient. Though there was little science to these remedies, one of the chemical compounds found in thyme is a powerful antiseptic. Known as thymol, it’s still widely used today in mouthwash, hand sanitizer and acne medication. 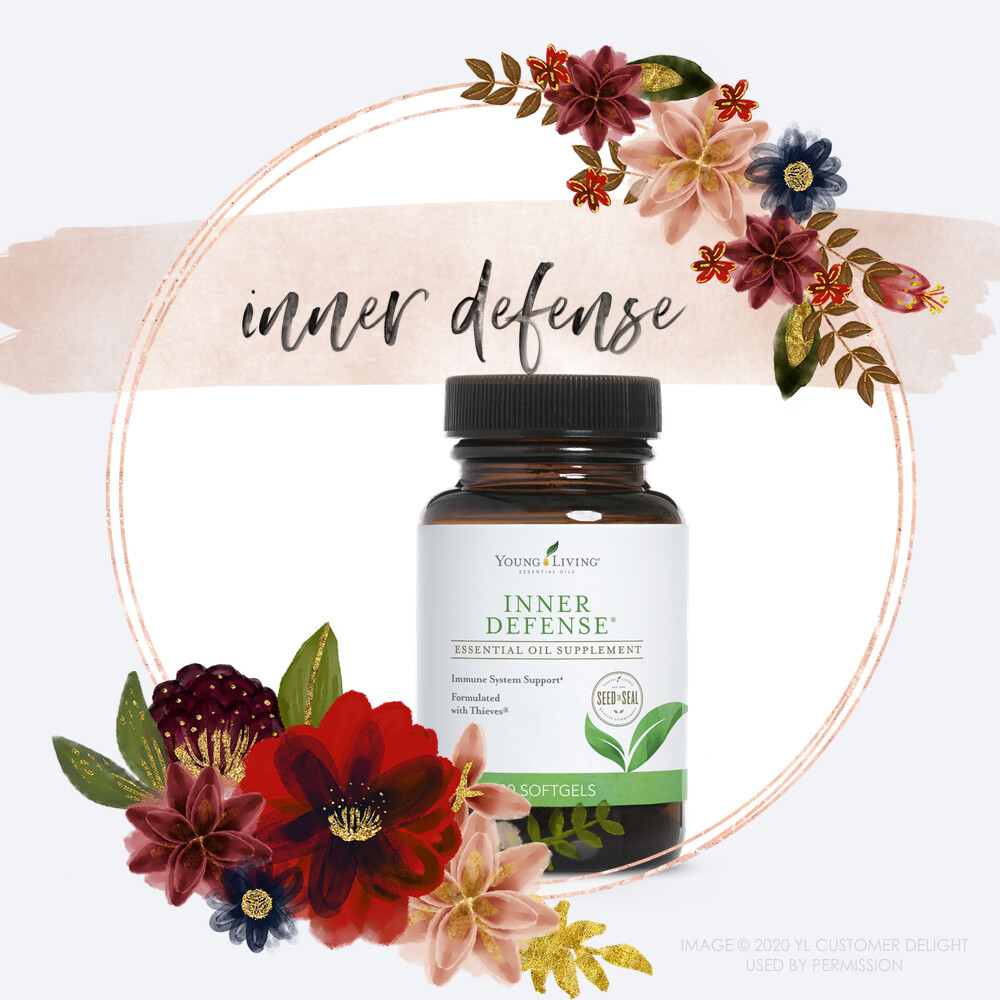 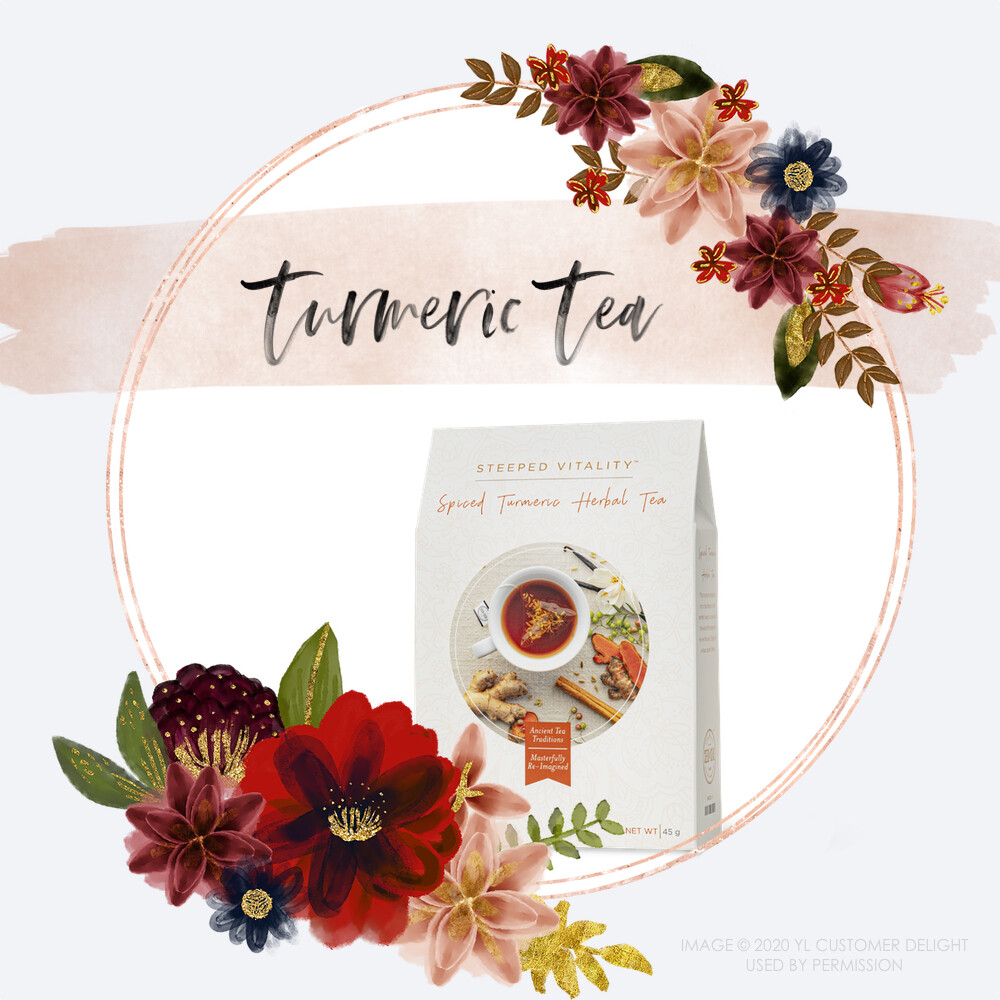 SPICED TURMERIC HERBAL TEA | FREE WITH 300 PV ORDER
Who says all herbal teas are weak? Wrap your hands around a hot mug and wrap your senses around the warm, inviting spices of Young Living’s Spiced Turmeric Herbal Tea. Let the aromas of chai and rooibos engage your soul as this exquisitely crafted tea steadily steeps. Upon your first sip, the flavor of ginger warms your soul with its familiar, comforting spice. The artisanally blended, traditional taste of chai spices begin to emerge, finishing with the earthy, grounding flavor of turmeric. Filled with organic ingredients, Spiced Turmeric Herbal Tea is designed to pair with Tangerine Vitality™ essential oil. Add your favorite milk to this herbal brew to create a variation on golden milk, a traditional Indian drink celebrated in Ayurveda.
YL BRANDED ARTISAN MUG | FREE WITH 400 PV ORDER
Empower financial well-being. In collaboration with the Young Living Foundation, each mug is handcrafted from natural, locally-mined clay by women artisans in Vietnam. Your order helps these artisans break the cycle of poverty, find financial stability, and provide for loved ones.
Sip on something sweet and healthy, infuse your tea or homemade apple cider with Vitality oils and savor the pure flavor in this beautiful blue and gray mug. 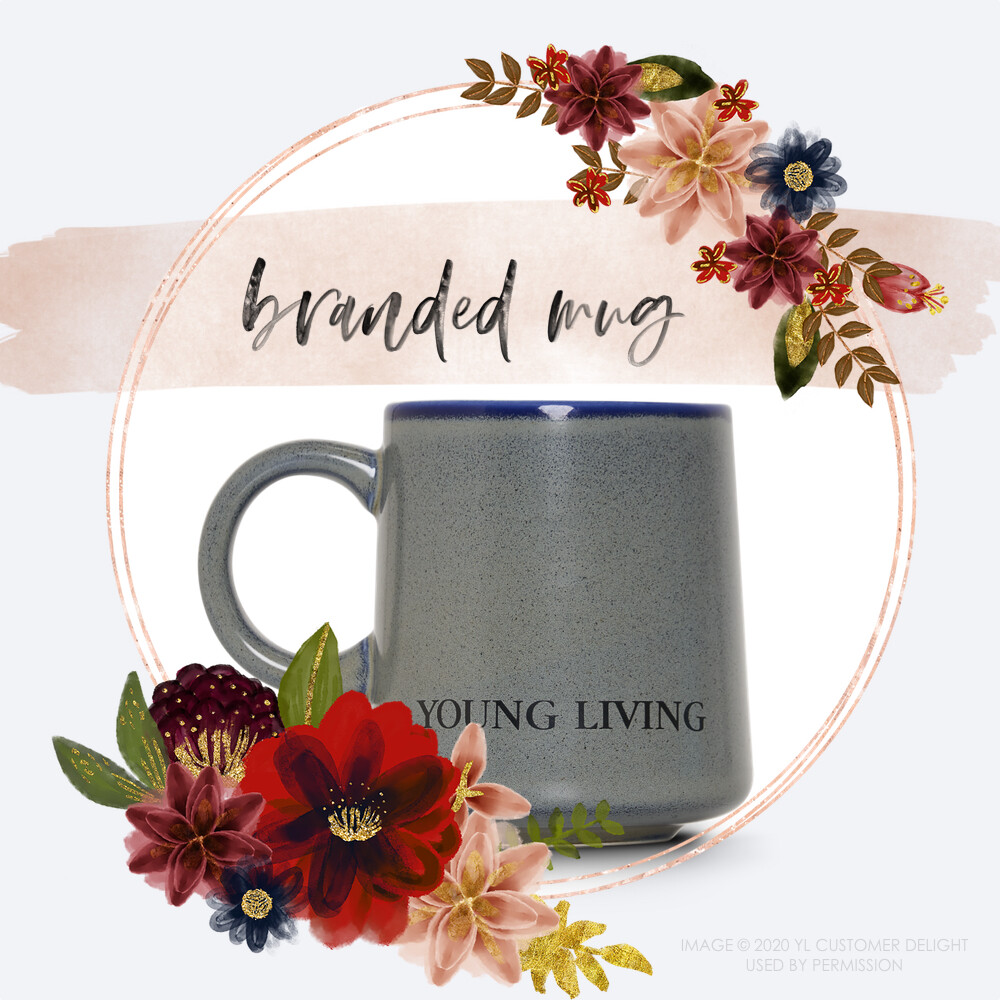 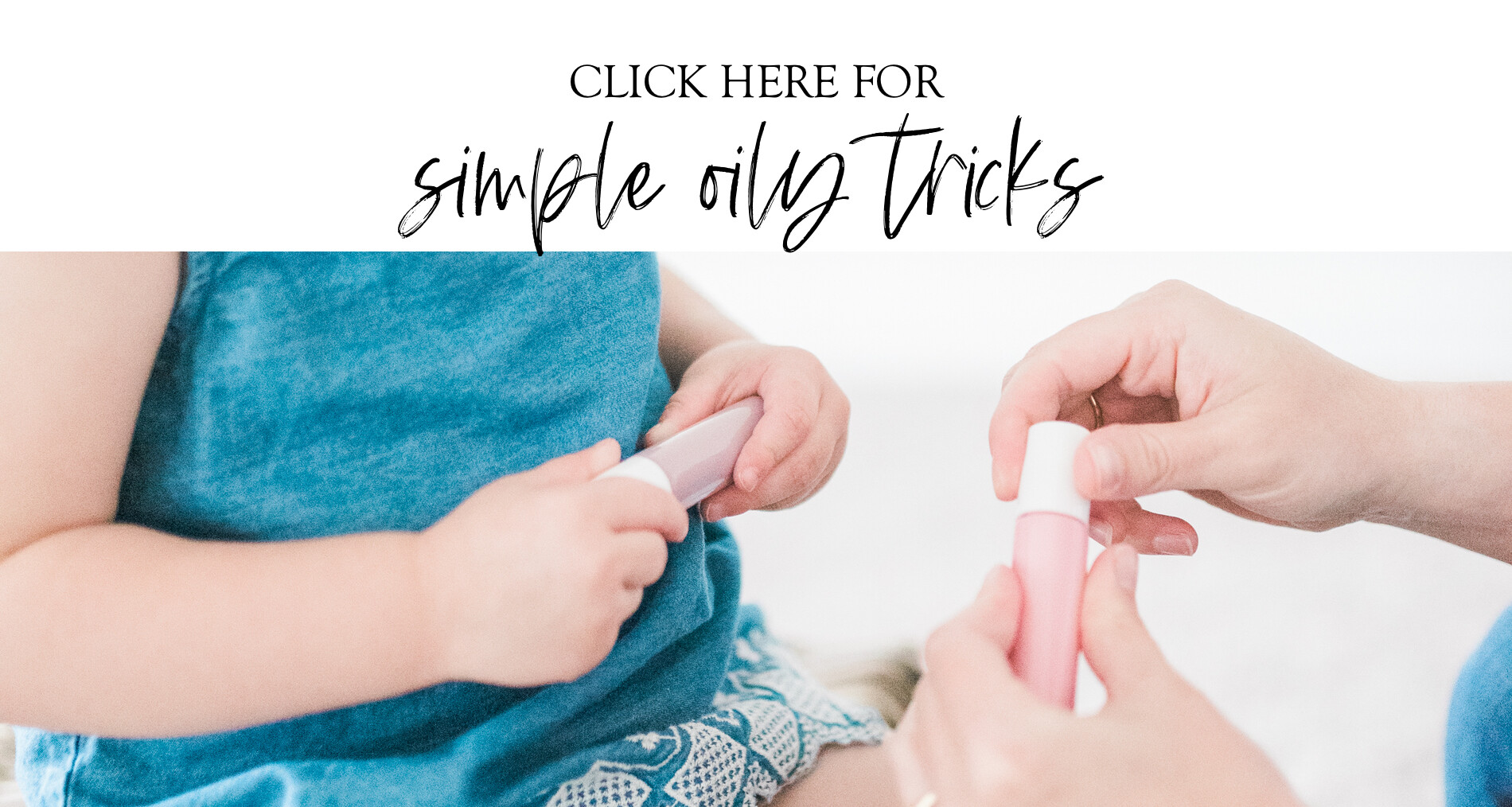 Hi, I’m Amanda, and I help mamas feel less stressed, less angry, and flourish in their motherhood. I’m passionate about this because I’ve been there. The first few years of mother I felt like a stranger inside my own body.

Even though I was already what some would call a “crunchy mama” and doing all the healthful things, I was struggling with anxiety and depression, and most of the time it showed up as anger. I hated being an angry mama! I knew it wasn’t healthy for me, for my marriage, or my family. And even though I hated to admit it, I knew our family wasn’t flourishing.

One summer day I was introduced to a product that a lot of people talk about. I’d even done some research on it in the past and was super skeptical. I’m not really into fads, and I didn’t want to spend money on something that might not work.

This time was different. This time I knew the company who made it and trusted the source - so I tried it.

Now my life, and our family, is dramatically different. I used to have to put on a face and pretend things were fine and that I wasn’t secretly crumbling on the inside. But now? Now I get to live with freedom from the chains of anger and anxiety. I no longer have to “fake it til I make it” with my kids, or anyone else for that matter! I’ve got tools for managing my stress and anxiety in healthy ways, and I’m on a mission to help others break free and empower themselves with the resources I’ve worked so hard to get myself. 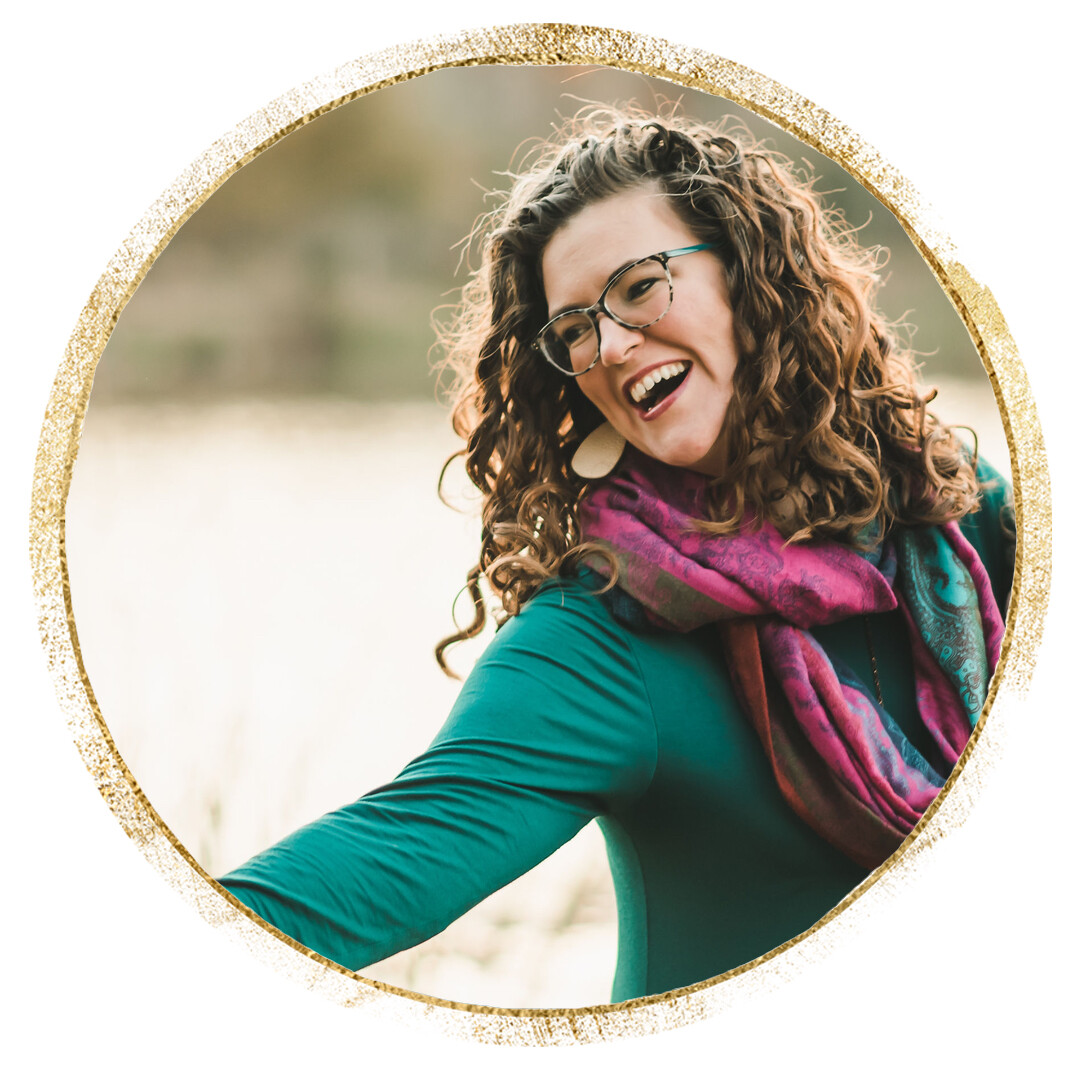